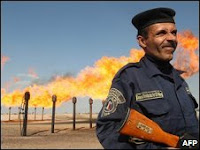 As our Merlin military transport helicopter scudded over the flat dun landscape of southern Iraq, the rear gunner threw himself from side to side on the open tail-flap, peering down this way and that, ever on the alert for potential danger.

Every so often, the juddering craft jolted even more as a bunch of flares were sent arcing down through the sky.

At our destination, an installation that seemed to be in the middle of nowhere, we hovered and landed in a whirlwind of brown dust that ravaged washing-lines strung between mudbrick houses nearby.

A small crowd of curious locals turned out to watch what was clearly something of a novel event, as out clambered an odd mixture of British military personnel in combat fatigues and civilians in dark suits awkwardly crimped by flak jackets and topped by ill-fitting helmets.

For this was not a combat mission. Those are few and far between nowadays for the 4,000 remaining British forces in southern Iraq, who are preparing to leave.

Already, since late last year, the primary focus of their mission has been formally changed from security to promoting good governance and economic development.

As part of that revised mandate, here they were ferrying a delegation of Japanese economic officials around the south, where Tokyo is pumping in hundred of millions of dollars in soft loans.

As their guide and escort, the Japanese had no less a figure than the top British officer in Iraq, Lt Gen John Cooper, who retires shortly as deputy commander of all Coalition forces in the country and is also a former commander of the British troops in the south.

We had landed at the Basra oil refinery, where the visitors were given a warm welcome by director-general Tha'ir Ibrahim and his staff.

"Now that security is so much better, we're launching projects to increase the refinery capacity by about 35% and to upgrade the product specification," said Mr Ibrahim.

"The tank farm [oil depot] here was 60% destroyed during the war with Iran in the 1980s, and then hit again by the Coalition during the occupation of Kuwait in 1990."

"Now the Coalition are helping us rehabilitate the plant. That's life!"

The Japanese delegation were as delighted as their hosts at being able finally to visit projects which they have been involved in from afar for years, without being able to see them on the ground for security reasons.

"I really feel the big change over the past year, and I feel really safe here," said delegation leader Hideki Matsunaga, who heads the Middle East department at the Japanese International Co-operation Agency.

"Of course there are still risks and some incidents and so on, but that's the same all over the world."

"Maybe it will take a little bit more time to change the perception of private-sector people, but maybe first public-sector people like us will come more frequently, and demonstrate that people can now do business as usual."

The Japanese are pledging as much as $1.5bn (£1.05bn) in soft loans (0.75% interest over 40 years, with a grace period of 10 years) and projects will be open to international tender, not just Japanese companies.

So far, the British forces have helped show 19 companies around the south, where $9bn-worth of investment possibilities have been identified.

But despite the money and lives that it has cost the British to maintain their presence in the strategic, oil-rich south, British companies have been slow to show interest in exploring the investment opportunities.

That's something Lt Gen Cooper would like to see remedied.

"I think there is sufficient potential here, in what is the third largest oil reserves in the world, for British companies, and indeed any others, to come here," he said.

"This may currently be in commercial terms quite high risk, but it is also very high reward, and I would certainly encourage any British company, whether it be in the oil industry or any other part of industry, to get involved in southern Iraq, because the potential is really quite significant."

Back at the Coalition Operations Base at Basra airport, huge energy is being poured into a co-ordinated effort involving British and American diplomats, development agencies, the military and the Iraqi authorities, mainly focused on bolstering the huge recent security gains by promoting effective regional government and projects that provide benefits and jobs for the people.

The provincial elections on 31 January passed off without a single incident, to the huge relief of Coalition and Iraqi officials.

"The time is now," said one British official.

"There is a significant window. But there is no complacency, because there is still danger."

"The threat now is if the provincial council should fail to deliver, especially in the realm of creating jobs."

Security in Basra and elsewhere in the south was transformed last spring, when the Iraqi Prime Minister Nouri Maliki threw the Iraqi army into a campaign, codenamed Charge of the Knights, to root out Shia militias which had plagued the area.

Officials estimate that there may be around 200 militiamen still underground in Basra, which is controlled by up to 30,000 Iraqi army forces and police.

Nobody can rule out a return of militia rule if the momentum of the state should falter.

That explains the sense of urgency behind the efforts for political and economic development.

Most of the remaining 4,000 or so British troops will end their mission in May and be out of the country by the end of July.

An estimated 400 will stay behind to help train the Iraqi navy and provide other support for the Iraqi forces.
Posted by Media Ops Blog at 08:18