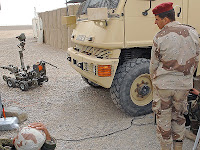 British soldiers based in Basra have been training soldiers from the Iraqi Army's 14 Division Engineer Battalion Explosive Ordnance Disposal (EOD) team to use the latest robotic EOD technology.

Their capability is being built up through the efforts of Captain Joe Brown, an Ammunition Technical Officer from the Royal Logistic Corps, and his Improvised Explosive Device (IED) Disposal team, which is part of the Multi-National Division (South East) Joint Force Engineer Group based outside Basra City.

"The 14 Division Engineer Battalion attach great importance to EOD work and are always very enthusiastic to take part in training."The Iraqi soldiers will soon be busy disposing of improvised explosive devices planted by insurgents as well as the piles of munitions left over from past wars.

The training, which ran all last week, was held at the 14 Division Training Centre at Shaiba which is staffed by instructors from the British Army.

The robot model in service with the Iraqi Army is the 'Mini-Andros 2' built by Remotec, a subsidiary of Northrop-Grumman in the USA. This equipment enables EOD operators to make explosive devices safe while reducing the risk to the operator or others.

After a classroom lesson the Iraqi engineers were keen to practise what they had learned and demonstrate their growing abilities by defusing a dummy IED using the IED robot.