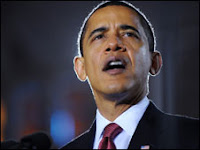 President Barack Obama has announced the withdrawal of most US troops in Iraq by the end of August 2010.

In a speech at a Marine Corps base, he said the US "combat mission" in Iraq would officially end by that time.

Mr Obama praised the progress made but warned: "Iraq is not yet secure, and there will be difficult days ahead."

Some Democrats are concerned that the timetable falls short of his election pledges on troop withdrawal.

Mr Obama had said previously that he would completely pull out troops within 16 months of taking the top job.

Earlier this month, he ordered the deployment of up to 17,000 extra US troops to Afghanistan, saying they had been due to go to Iraq but were being redirected to "meet urgent security needs".

In his address at Camp Lejeune, a Marine Corps base in North Carolina, Mr Obama said his national security team had drawn up a "new strategy" for US involvement in Iraq.

The strategy recognised that the long-term solution in Iraq must be political and that the most important decisions about its future must now be made by Iraqis, he said.

"We have also taken into account the simple reality that America can no longer afford to see Iraq in isolation from other priorities: we face the challenge of refocusing on Afghanistan and Pakistan; of relieving the burden on our military; and of rebuilding our struggling economy - and these are challenges that we will meet."

Mr Obama said all US troops would have left Iraq by the end of 2011, in line with an agreement signed between the two countries last year.

The president recognised that the conflict had been "a long war" and paid tribute to US forces who have served in Iraq.

"Thanks to the sacrifices of those who have served, we have forged hard-earned progress, we are leaving Iraq to its people, and we have begun the work of ending the war."

He also announced that his administration would increase the numbers of soldiers and Marines, in order to lessen the burden on those now serving, and was committed to expanding veterans' health care.

Addressing the Iraqi people directly, Mr Obama said theirs was "a great nation" that had persevered with resilience through tyranny, terror and sectarian violence.

He went on: "So to the Iraqi people: let me be clear about America's intentions. The United States pursues no claim on your territory or your resources.

"We respect your sovereignty and the tremendous sacrifices you have made for your country. We seek a full transition to Iraqi responsibility for the security of your country."

The two nations would build a future relationship based on mutual interest and respect, he said.

Mr Obama said there were important lessons to be learned from the Iraq conflict - among them that the US must go to war with clearly defined goals, that it must weigh the costs of action and "communicate those costs candidly to the American people".

As a result of these lessons, he had ordered a review of US policy in Afghanistan, he said, and put the costs of Iraq and Afghanistan into the federal budget.

Stressing that Iraq's future was inseparable from that of the broader Middle East, Mr Obama said the US would now "pursue principled and sustained engagement with all of the nations in the region, and that will include Iran and Syria".

The new US ambassador to Iraq would be Christopher Hill, the former US chief negotiator with North Korea, the president added.

The withdrawal plan is a middle way between the speedy reduction Mr Obama envisaged during his election campaign and the slower one some military leaders may prefer, BBC North America editor Justin Webb says.

Mr Obama wants only two combat brigades to leave this year but after December elections in Iraq the pace should quicken, our correspondent says.

The BBC's Mike Sergeant in Baghdad says that security in Iraq is now better and people say they are ready for US forces to leave.

However, some people are deeply worried about what exactly will happen when US combat troops disappear, our correspondent says.

While Iraqi forces are much better trained and equipped than before, they are still dependent on US troops for support in many areas, our correspondent adds, and a great deal of American financial and political support may be needed for years to come.

Democrats have expressed concern that the troop withdrawal is being watered down.

Speaking before Mr Obama briefed Congressional leaders about the plan on Thursday, Democratic Speaker Nancy Pelosi said 50,000 troops seemed too many for a residual force and needed to be justified.

However, other sceptics have expressed concern that a fast withdrawal could reverse the dramatic but fragile gains in security in Iraq.

John McHugh, the top Republican on the House armed services committee, said after the briefing that Mr Obama had promised the pullout strategy would be revisited if violence in Iraq increased.
Posted by Media Ops Blog at 23:47