I’ve been downtown twice in the last couple of weeks now, so I thought it might be interesting to set down some impressions of the city (as well as some photographs). Now that security has improved, we’re out and about in town on a regular basis. One of my trips included a long drive into and through town which gave me a particularly good opportunity to get a sense of the city and how things are doing. 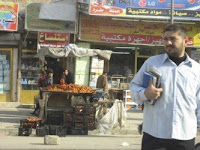 Firstly, the atmospherics (as the military term them) are very positive. I’ve worked in other cities in conflict zones and there’s nothing like getting out on the ground for getting a sense of how you’re viewed. As we drove into town lots of I was positively impressed at the warm reception we received – lots of people waved or gave us the thumbs up and in many ways I found it reassuring that often people didn’t bat an eyelid at our presence either way.

Secondly, it’s very obviously been election time. The provincial elections took place on Saturday, and the city is covered in political posters - and since there were over 1200 candidates there’s a huge range of posters. Maybe this’ll seem simplistic but it looks to me like a town in which the population is engaged in the democratic process (and I’ll write about the elections more shortly). Together with the election posters there are a lot of banners and flags still up from the recent Shia religious festival of Ashura so the streets are nothing if not colourful. 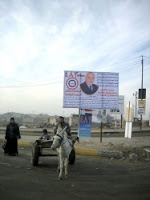 Thirdly, though it’s down at heel and seen better days you can see that the downtown area - particularly the Corniche which runs alongside the Shatt Al Arab waterway, with its cafes and floating restaurants and the canals that spur from it - has real potential to be an attractive location. It’s often repeated to us that Basra used to be the ‘Venice of the east’ and while getting back to that is clearly some way off you can see how that may have been true and how it could be again.
Fourthly, there’s a strong and visible Iraqi Security Force presence – both police and army – on the streets. Checks points are set at regular intervals. Security has improved dramatically, and while the situation remains fragile it is incredibly encouraging that it is now the Iraqi Army that people rely on to provide security, not the UK or US.
Lastly, the city is vast, dirty and in places squalid – the journey into town takes over an hour, much of which runs past obviously poor communities where ramshackle houses stand next to pools of stagnant water and piles of rubbish. Much of this reflects decades of under-investment in the city – the city did particularly badly during the Saddam years (the city’s predominantly Shia and the Saddam punished it by starving it of funding following the Shia uprising in 1992 – it also suffered particularly severely during the Iran-Iraq war).

That said, I’m told by many of the people who’ve been here for a number of years that the city is currently in a better state than they’ve seen it before and that visible progress is being made. And while it’s clear that the city’s going to need years of sustained economic growth and investment in basic infrastructure to bring it to where it should be - given Iraq’s relative wealth – it’s also clear that the city’s moving in the right direction.
To see the blog on the DFID website click here
Posted by Media Ops Blog at 18:28