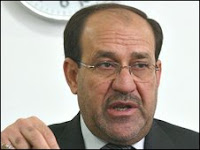 His coalition won victories in Baghdad and Basra, and emerged as the largest group across the mainly Shia provinces of southern Iraq.

The other major city, Mosul, saw a strong result for a Sunni faction which boycotted the last elections.

Saturday's ballot was the first major poll held in the country since 2005.

The preliminary results, which are subject to appeal and review, confirmed what many anecdotal and unofficial accounts had already claimed, that the State of Law Coalition, headed by the prime minister, has come out very strongly in Shia and mixed areas.

It took 37% of the votes in Basra, 38% in Baghdad, and was ahead of the competition in most of the largely Shia south.

This happened at the expense of what was the biggest Shia faction, the Supreme Islamic Council in Iraq, regarded as close to Iran, and running under a different name.

Followers of the militant Shia cleric Moqtada Sadr will also be disappointed by their results.

Among the most closely watched returns were those for the mainly Sunni province of al-Anbar, to the west of Baghdad, where tribal leaders had threatened to take up arms if rival Sunni political parties came out on top.

The results showed one of the traditional parties just half a percentage point ahead of the main tribal coalition, with their chief adversaries coming in third.

It is perhaps a good enough result for the tribal factions to head off trouble, though a pre-emptive curfew has been declared there.

Further north in Mosul, as expected, a newly-formed Sunni faction came out well ahead of Kurdish groups, restoring political balance in an area where Sunnis are the majority.

The electoral commission says it is investigating many claims of election irregularities and the final results may be amended in the coming weeks if they are justified.