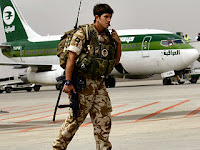 British troops are carrying out their final patrols before the end of combat operations.

The remaining 3,700 or so UK servicemen and women stationed in the southern province of Basra are preparing to pull out after six years.

British forces handed over military command in Basra to the US Army at the end of March and will complete the withdrawal of combat troops by July 31, leaving only about 400 UK personnel in Iraq.

Troops from 15 Squadron RAF Regiment said they were proud of the rapport they have built up with local Iraqi Marsh Arabs on their regular patrols around the main coalition base next to Basra International Airport.

Resident Naseem Ashur said: "I want them to stay. The British are better than the Iraqis. The British forces brought the sand to help us build this land five years ago."

"The Iraqi government didn't do any projects for us to reduce the problems of our people. The British forces did all those projects."