Couple who found love out in Iraq - BBC 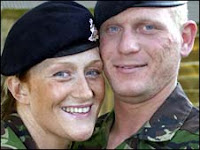 As the UK mission in Iraq draws to a close, one couple has more reason than most to reflect fondly on their time in Basra.

Bombardier James Day, 24, and his wife Natalie, 22, met and fell in love in unusual circumstances while serving with the Royal Artillery in 2003.

Mrs Day was badly injured when she fell out of the Land Rover James was driving and while she lay on the ground, he proclaimed his love for her.

She broke her back and suffered temporary paralysis, but made a full recovery. The couple married and now have two little girls.

Bombardier Day, from Manchester, explained what happened that fateful day.

"Before the actual accident we were in Basra Palace having a little row, a little lovers' tiff so to speak. She wanted to go to the cookhouse and I wanted to go for a pizza. So we argued that much about it but never had either anyway.

"Then I said to her, jokingly, I'm going to hit every bump on the way back, roll you out of the Land Rover and break your back. And lo and behold I did."

Mrs Day flew out of the back of the Land Rover as it hit a particularly deep pothole.

He added: "After that the locals started to gather around and cause a bit of trouble, I took her helmet off and they realised she was a woman, and they instantly stopped. It was quite a strange experience to see them stop attacking us and start helping us."

The couple married in 2006 at Mansergh Barracks in Germany, where they were serving.

Mrs Day, who is originally from Thornaby in Teesside, says she is relieved her husband is one of the first men home from the latest tour of duty in Basra.

"I'm totally glad we're out of there. But it's where we first met, isn't it, so it's something special to me."
Posted by Media Ops Blog at 19:25