U.K. Sailors to Remain in Iraq to Train the Navy - WSJ 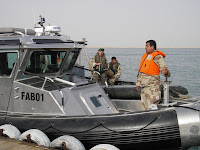 The Iraqi government said Wednesday it was studying a formal agreement to have a few hundred British sailors stay past the end of a mandate that expires in July to train their Iraqi counterparts.

Iraqi government spokesman Ali al-Dabbagh said bilateral negotiations would focus on ways to train and support the Iraqi navy to help protect ports and oil facilities in Basra, in southern Iraq. Protection of the oil terminals is crucial because cash from oil sales accounts for more than 90% of Iraqi government revenue. Iraq also faces oil smuggling, border disputes with Iran and other issues in that area.

Since December, when a July pullout date for U.K. troops was agreed, the Iraqi and British governments have both expected that a small number of British personnel would stay behind. In April, the U.K. military said it expected to keep 400 personnel in Iraq to help train the navy and conduct general officer training.

The port of Um Qasr in Basra province is Iraq's only link to the Persian Gulf. The port is the second-largest source of revenue for the Iraqi government, after oil receipts. During the British military's six years in Iraq, it has focused on helping its Iraqi counterparts develop security for the ports and oil facilities in Basra.

The Iraqi and U.K. governments had agreed the British would complete their mission by June, and a complete withdrawal would take place by the end of July. Most of the 4,100 British troops in Iraq have already left the country. The British troops are being replaced by more than 5,000 American forces.

Mr. Dabbagh said the possible pact would be presented to the Iraqi parliament for approval.

A British military spokesman couldn't be reached to comment.