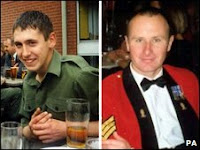 Two Iraqis have gone on trial in Baghdad accused of murdering two British soldiers during the US-led invasion of their country in 2003.

The defendants were officials of Iraq's former ruling Baath party who allegedly killed two British soldiers after they were captured by militias near Basra.

Pictures taken of Luke Allsopp and Simon Cullingworth after the ambush were later shown on al-Jazeera TV.

Faisal al-Saadoon and Khalaf Mufdhi are being tried under Iraqi jurisdiction.

They were handed over to the Iraqi High Tribunal by British military last December after the House of Lords rejected objections to them being tried in Iraq.

Lawyers for the men had argued allowing them to stand trial in Iraq, where they could face the death penalty, violated both the European Convention on Human Rights and the 1998 Human Rights Act.

Since the invasion in 2003, British fatalities in Iraq have totalled 179, including 136 killed in action.

TV controversy
Staff Sgt Cullingworth and Sapper Allsopp were both wounded when Iraqi Fedayeen forces ambushed their convoy on the outskirts of Zubayr on March 2003.

While some members of the convoy escaped, the pair were taken to a local Baath party headquarters and then to an Iraqi intelligence base, where they were shot dead.

Footage of the two soldiers lying wounded near their vehicle was broadcast by Qatari-owned al-Jazeera, prompting condemnation by the British government.

The soldiers' graves were discovered a month later and their bodies were exhumed.

Sapper Allsopp, from north London, and Sgt Cullingworth, from Essex, were both in the 33 Engineer Regiment - a specialist bomb disposal unit of the Royal Engineers based in Wimbish, Essex.

The Ministry of Defence, the Foreign Office and the Ministry of Justice said they have been given assurances at the "highest level" that both men would receive a fair trial and treatment, whatever the outcome of the case.
Posted by Media Ops Blog at 15:26