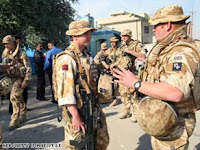 The Iraqi Presidency Council approved a resolution Sunday that will allow non-U.S. foreign troops to remain in Iraq after a U.N. mandate expires at year's end.

It was the last step for final adoption of the resolution, which won parliamentary approval Tuesday.

Iraq's main political parties hammered out the resolution a week ago, after an impasse among parliamentary factions threatened to continue beyond the December 31 deadline.

A separate, previously approved agreement authorizes U.S. troops to remain.
Britain has about 4,100 troops in Iraq, the second-largest contingent after the United States, which has about 142,500. Other countries covered under the resolution -- El Salvador, Australia, Romania and Estonia -- have a total of several hundred troops in the country.

See the full report on CNN here
Posted by Media Ops Blog at 15:13